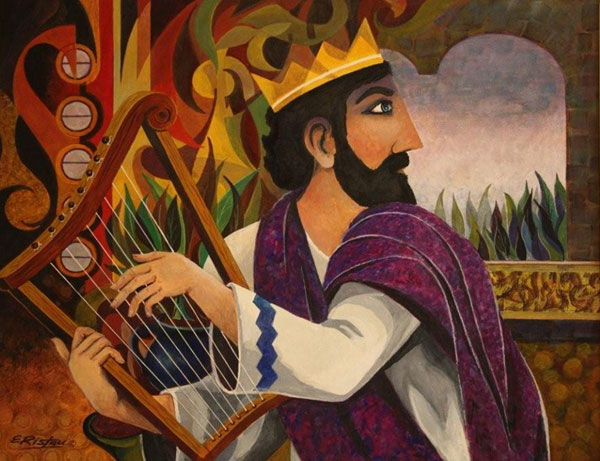 As part of my Lenten sacrifice, I do a tradition of praying the Divine Office’s morning prayer as soon as I wake up (before coffee, so there’s the sacrifice) and evening prayer just before bed.  I’ve been doing it now for at least almost ten years, and it’s nice to come into this rhythm of talking to God first thing and last thing.

The prayers are about 85% psalms, and Fridays especially highlight King David’s famous penitent Psalm 51, a song about his own sinfulness and asking God for His mercy.

King David is, by far, my favorite Old Testament feature (you’d thought it was Moses, didn’t you?!), because he was a man declared as being “after God’s own heart.”  Being so single-mindedly after that one goal is something that just strikes me as…well, something amazing. He’s also my favorite because he danced wildly, with abandon, at the parading of the Ark of the Covenant when it came through, so full of joy at its presence that he just couldn’t help himself.  And I like to dance.

Mostly, though, I think it had to do with how far he fell. Even after becoming King, after knowing God and the feeling the firey love he had for Him in his heart and serving his people righteously, he still fell pretty far. He ignored his chief prophet, lusted after a woman and had her husband killed (after impregnating her) and made it look like a wartime casualty.

It sort of reminds me of Saint Peter – the man who traveled extensively with Jesus, who learned from Him, gave up his family and livelihood for Him and fought for Him, only to sell Him out to save himself from ridicule.

King David wanted to know God and did know God, yet committed his greatest sins after that fact. The same with Peter.

I think you can file King David, Saint Peter, and a whole lot of us inside that “Journey Never Ends” folder. We will never come to a place where we can presume we know God, where we can rest comfortably on our laurels and order Him around, where we think things no longer apply to us. Because it all comes around again. King David knew that when Nathan told him of God’s anger towards Him, and it took the death of his own son to realize the redemption he needed. Saint Peter knew that when he felt horrible and wept after denying Jesus three times, having to live with his guilt.

But the redemption counts the most. King David was made righteous again; Saint Peter eventually became the head of the Church and the first Pope. What will become of us, I wonder? After we’ve fallen and been picked up and dusted off again, what new heights will we be set upon?

One thought on “After God’s Own Heart.”